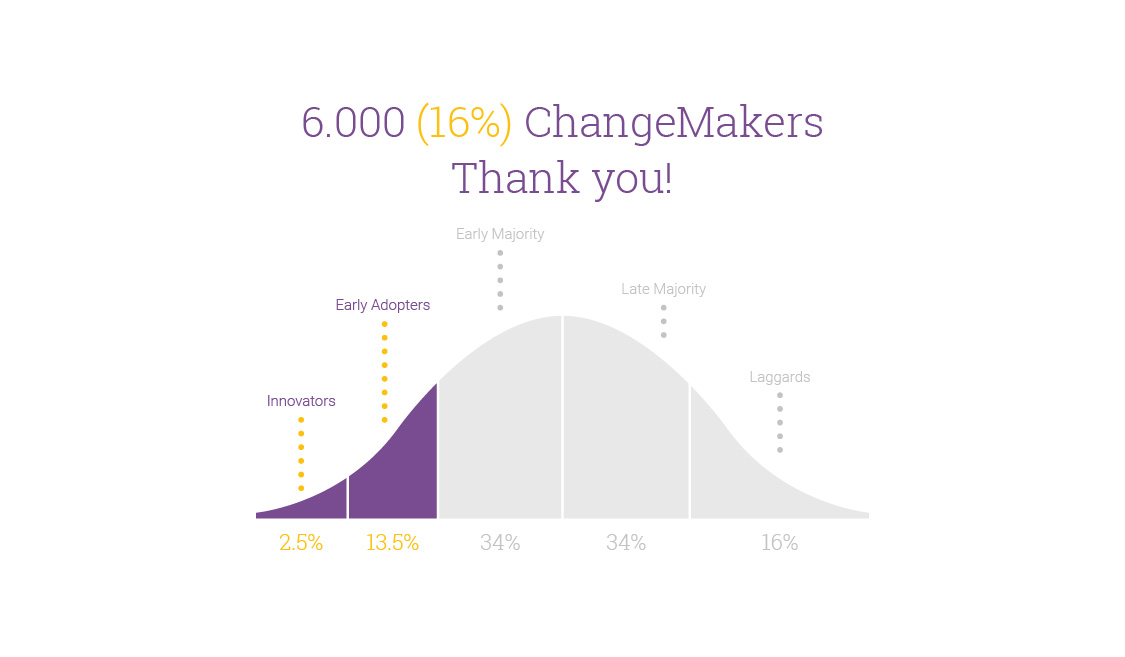 Disclaimer: This post is inspired by #Everett_Roger’s  #Diffusion_of_Innovation theory, the #WaitButWhy (one of the greatest sites on this or any other planet) #ElonMusk post and 100mentors data.

After two academic years of cooperating with schools worldwide, we have partnered or tried to partner with a good sample of schools. It’s not exactly what we would define in statistics a “random sample”, but it is a significant and diverse sample, which we can draw some conclusions from, regarding the educators’ attitude when dealing with innovation.

We have reached roughly 3,000 schools primarily via email campaigns, featuring 4 different value propositions of 100mentors:  “student-centric engagement”, “ease of use”, “on-demand”, “customized video library, built by your students”.  We have an average open rate of 33%.

We offer a free trial, which 150 schools have used, out of which 132 schools entered the basic “Wing” package.

Bottom line is that about 5% of the schools that we reached, after receiving 4 emails, reacted and after they entered our “School collaboration pipeline”, ultimately 90% partnered with us 🙂

“This is great conversion” you will say! “This is a rigorous lead generation process“, we will shout!

Our target persona is Jenny. Jenny is the changemaker of her school. The 16%.

Her main characteristic is that she is always on alert to listen to her students and bring what excites them to engage, following the school’s strategy.

She is not necessarily a tech-geek. But if this is what it takes to make the students love a course/activity, she even runs new tech initiatives herself and ultimately finds it surprisingly easy to adopt a new tool and make other educators use it and love it.

Jenny is either an inspired teacher and many times, the principal/head of school herself.

Well, ok it has occurred to us that Jenny is the technology officer, who apart from her technology expertise shares her insights with the decision makers about how a new tool brings what the educators have been looking for in mainstream solutions.

Jenny offers 100mentors as a resource to all the school staff. Ultimately it is the teachers and the academic and career counsellors who make the heaviest use of 100mentors in their classes and offices.

Anytime we write an email, present to an audience, create any kind of content, we address Jenny, who belongs to the 16% of the left hand side of the Diffusion of Innovation normal distribution.

This allows us to stay focused to those innovators who have been looking for us. And it is a great pleasure when we find each other in class!

Our partners so far belong to two big categories of Chefs:

Those schools heavily use the “Enhance your Lecture” option.

Those schools primarily use the “Academic Fair, on demand” and the “Career Day, Every Day” options.

The “by-default Chefs” usually belong to the far-left 2.5% of the “innovators” whereas our “Michelin-star Chefs” become triggered a bit later, as “early adopters” (13.5%).

I am thinking about how to close this post… and the only thing that comes to mind is the next post.. I would like to find out whether there is a correlation between, a) what “pile of the distribution” a school belongs to (are you an “early adopter” or a “early/late majority” and b) the level of student engagement. We have some good data here already, but I feel that we will be able to share some valid conclusions in a couple of months.

Till then stay tuned for more data, case studies and edTech joy!

And let’s not forget to pay a tribute to the innovators and early adopters of our schools, who make our lives sparkling and meaningful, early on. And this can become obtained via simple means, not necessarily via cutting edge Education technology. Check Mr. White, our February “hero” here:

“I want them to be excited to come to school,

Because before I’m able to deliver a substantial amount of content to them, they have to buy into me, they have to invest in the teacher itself..”

“One thing that is going to stick with them forever is, “How did Mr. White treat me when I was in his grade?

The handshake kind of draws them in and once I have them in and have their trust and they’re invested in me then I can deliver my content and see the academic side of it increase.”

So that’s really why I do it, to bring joy to them.”

So, Ready to Be an Educational Changemaker?

100mentors is the platform and network empowering students to connect with mentors on-demand to guide them in their most important academic and career decisions. With 100mentors, schools enable students to open up their circles of influence to include mentors from 300+ universities and 500+ companies across the world, while companies and universities are able to tap into a quality pool of potential program and job candidates.

Yiorgos enjoys surrounding himself with his role models: educators & entrepreneurs. After having worked in 4 US states, Spain, Greece & China, “arguing like I am right, listening like I am wrong” is his motto.